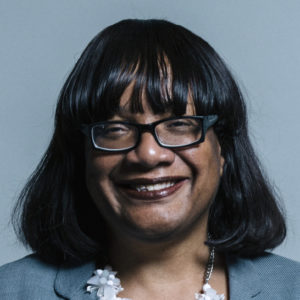 Ms Abbott was born in Paddington, London to a Jamaican-British family. She went to Harrow County Grammar School before going on to read History at Newnham College, Cambridge.

Abbott began her political career in 1982 when she was elected to Westminster City Council. She served until 1986.

In 1983, she was a part of the Labour Party’s Black Sections movement alongside (Paul Boateng and Keith Vaz), campaigning for more African Caribbean and Asian representation in British politics.

Ms. Abbott had an issue with the idea of Tony Blair pushing for “New Labour,” which pushed the party to take a more centrist approach during the 1990s.

She was against several Blairite policies, including the start of a war in Iraq and the introduction of ID cards.

She founded the London Schools and Black Child initiative, which aimed to increase educational achievement among black children.

In 2010, Ms Abbott contested in the Labour leadership race. It was won by Ed Milliband, who subsequently appointed her to the role of Shadow Minister for Public Health.

Voted Aye to the Finance Bill: Committee of the Whole House Amdt 1.