Commercial Space Travel: Is This the Future of Flights?

When Will The Coronavirus Pandemic Be Over?

The idea of space travel has always fascinated humans. Ever since the first rocket was launched into space, people have dreamed about traveling to other planets and exploring what is out there in the universe. As technology has advanced over time, it’s become possible for more and more people to pursue this dream and make their life-long wish a reality. Space tourism companies are now developing new methods of space travel that will allow us to explore space without having to be a scientist or even an astronaut!

This article will discuss commercial space flights – how they’re being developed, who is taking them, and whether or not these flights will be successful in fulfilling everyone’s dreams of exploring outer space.”

Virgin Galactic is the world’s first commercial spaceline. With its sister company, The Spaceship Company, it is developing and operating a new type of space vehicle to open space for everyone.

Virgin Galactic has created a reusable SpaceShipTwo spaceflight system. It consists of WhiteKnightTwo, a custom-built, carrier aircraft, and SpaceShipTwo., The world’s first passenger-carrying spaceship was built by a private company and is now being used in commercial service.

The idea behind air-launching space vehicles is not new, but it optimizes safety and the passenger experience while preserving energy.

The first WhiteKnightTwo, VMS Eve, was rolled out in 2008 and has completed an extensive test flight program. The catamaran design provides a large and easily accessible payload area that makes separation easy when the spaceship is released. The ship’s twin cabins come from the same mold as the spaceship, providing both a cost-effective option for mass production and also a training platform for the crew.

SpaceShipTwo is a new reusable spacecraft designed to hold eight people and fly them in space.SpaceShipTwo is powered by a hybrid rocket motor that aims to combine the simplicity of solid rocket engines with the controllability of liquid. SpaceShipTwo’s rocket motor can be shut down at any point during the flight.

Virgin Galactic’s current operational SpaceShipTwo, the first to be manufactured by The Spaceship Company, was unveiled in 2016 and named VSS Unity by Professor Stephen Hawking. 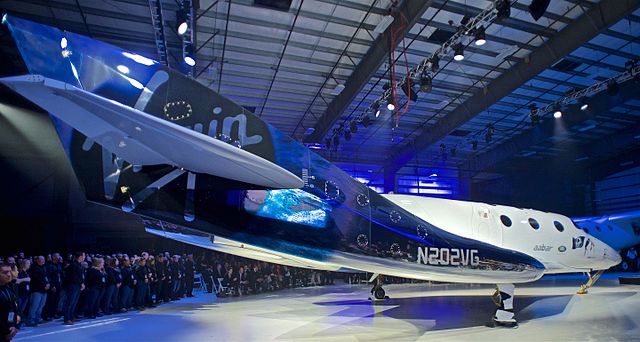 “We are at the dawn of a golden age of space exploration which will transform our relationship with the Earth and with the cosmos”.

Jeff Bezos founded Blue Origin to enable humankind to live in space to improve Earth. Blue Origin hopes that going into space will relieve Earth and believes that we need humanity’s expansion, exploration, finding new energy resources and materials, and focusing on industries that stress Earth as a step towards achieving our mission.

Blue Origin targets the 20th of July 2021 for its first suborbital sightseeing trip on the New Shepard spacecraft. The event marks the beginning of a new era in commercial space travel. The New Shepard space vehicle is set to fly six passengers over 100 kilometers above the earth’s surface.

The capsule is said to have tall observation windows, and Blue Origin claims they are three times larger than any current commercial aircraft.

Five will be occupied by astronauts of the six seats on Blue Origin’s first flight into space. The sixth seat will go to the winner of a nationwide auction which, as of the 24th of May 2021, is fetching a staggering $2.8m.

Space Exploration Technologies Corp. (SpaceX) is an American company in California. The company was founded by Elon Musk in 2002 with a goal of reducing the cost of space transportation so that humans can colonize Mars.SpaceX manufactures the Falcon 9 Rocket and Heavy launch vehicles, several rocket engines, Dragon space cargo ship, crew orbiter spacecraft and Starlink satellite communications links.

Elon Musk recently unveiled a new seven-seat Crew Dragon for commercial space travel. The Dragon is the only spacecraft that can fly back to Earth with a significant amount of cargo. It was also the first private spacecraft to take humans into space.

The design for the capsule is similar to the Apollo command modules that carried astronauts to the moon. The space vessel is connected for the duration of the launch to a section called the trunk, which has solar panels, radiators to remove heat from the capsule, room for cargo, and surfaces with fins that provide stability during emergency aborts. The capsule is about 8.1m (26.7ft) tall and 4m (13ft) in diameter.

The Crew Dragon is equipped with 16 thrusters. Each thruster can produce 90 pounds of force in the vacuum of space.

Who is buying tickets to space?

Commercial space travel is becoming a booming business as more people wish to take part in the next frontier. At this point, there are already people traveling on suborbital jets. However, this all comes at a high cost. Blue Origin was planning to charge passengers at least $200,000 for a space flight when considering rival plans announced by Virgin Galactic, which is expected to charge $250,000 but has not yet finalized pricing.

Yusaku Maezawa, a Japanese billionaire, has purchased a ticket to take SpaceX CEO Elon Musk on his first ride around the moon. Maezawa, a 42-year-old Japanese businessman, founded Zozo, Japan’s largest online fashion retailer. Plans are being made for a Big Falcon Rocket that is still just in production now.

“I would like to invite six to eight artists from around the world, including me,” Maezawa said. “They will be asked to create something after they return to Earth. These masterpieces will inspire others and make people dream again.”

The list of people registered for space travel includes more than just celebrities, entrepreneurs, and wall street investors. Mrs. Maisonrouge, a space enthusiast and fan of the Apollo 11 mission, has many memories of how humans first set foot on the moon. The 61-year-old business school professor signed up back in 2005 for the promise of five minutes in zero-gravity, paying $250,000 to travel beyond the earth’s atmosphere.

For a quarter of a million dollars, people can get to see the earth from space just as they would in an exclusive first-class cabin. Virgin Galactic’s surging demand for its trips to space will far exceed supply in the short term, which may result in price increases. Although this reflects a healthy interest in commercial space travel, it also shows that such efforts still have a way to go before they catch on with the mainstream.

Will commercial space travel be a success?

With the push for technological advances and further exploration, accidents unfortunately happen. Spacecraft are complicated systems with countless aspects to be considered when planning missions, simulating them on Earth, or testing them. Failure often means the destruction of the craft and, in turn, death.

Michael Alsbury, who has died aged 39, after Virgin Galactic SpaceShipTwo crashed in the Mojave Desert, about 150km north of Los Angeles. The unfortunate incident occurred on the 31st of October 2014 when Michael Alsbury unlocked the feathering system at Mach 0.92 instead of at Mach 1.4, which resulted in a rapid extension of the feather system.

Each disaster that we’ve encountered in the past 50 years has improved our safety standards on space travel: Apollo 1 fire (January 27, 1967), The mission STS-51L Challenger (January 28, 1986), Disaster on Soyuz 11 (June 29, 1971). Space Shuttle Columbia: February 1, 2003. The tragedy is often followed by opportunity as calamity brings new regulations for safer commercial space flight.

Three billionaires — Bezos, Musk, and Branson — have increasingly directed their attention in the last two decades to outer space, which NASA and other Earthlings define as beginning at 50 miles above sea level. This huge capital funding has been instrumental in making new strides in the field of space travel.

With its Falcon 9 rocket and Crew Dragon capsule, SpaceX has now entered the orbital tourism arena. SpaceX launched and returned two NASA astronauts with its spacecraft for the first time, in a historic mission for both Musk’s company and the U.S. space agency. SpaceX is the first private company to send humans into orbit, a feat only previously achieved by government agencies.

The New Shepard spacecraft lifted off from Blue Origin’s West Texas test site with successful takeoff and landing of crew capsule 10 minutes and 15 seconds after liftoff while reaching a peak altitude of 107 kilometers. The capsule featured several modifications intended to support human spaceflight, such as seats, new communications systems and displays, and environmental control systems to regulate temperature and humidity.

Though the capsule has yet to fly people, Blue Origin optimistic about starting flights in the near future. “I think we’re getting really close to flying humans.” “We’re getting there.” This successful mission puts us one step closer to launching astronauts into space.

Richard Branson’s Virgin Galactic moves one step closer to commercial space flights by successfully putting the new VSS Unity spacecraft through an extensive engineering flight test on the 23rd of May 2021. Virgin Galactic Holdings Inc completed its first manned space flight, which flew at Mach 3 and reached 55.45 miles (89.2 kilometers) miles above the earth. Richard Branson was at the launch site to witness the historic event. He wrote a statement on Twitter saying, “Delighted to be on the flight line to watch Virgin Galactic’s first human spaceflight from the majestic Spaceport America.

Virgin Galactic fulfilled several test objectives during the flight, including:

To commemorate the first human spaceflight from New Mexico. New Mexico’s state flag lies proudly on the exterior of Spaceship. In addition to green chiles, known for their history in New Mexico’s agricultural and culinary industries.

Pilots C.J. Sturckow and Dave Mackay, the space plane, landed at 11:45 am ET after completing the suborbital flight.

Space travel tourism grows in popularity as more corporations such as SpaceX, Blue Origin, and Virgin Galactic provide sub-orbital flights for paying customers. Furthermore, in the future, when space tourism extends beyond Earth orbit, and lunar missions become a financial reality of space travel, interest in this industry will likely take off.

Customer Harassment | Why We Should All Confront It Head-on

Anti-Vaxxers Are at It Again: Rand Paul Refuses COVID Vaccine