Nancy Pelosi, a US politician, has called for a diplomatic boycott of the 2022 China Olympics on human rights grounds. This is not the first time that Nancy has made this call; she originally proposed it in 2008 after the Beijing Olympics. The idea behind her proposal is to send a message to China and other authoritarian regimes by refusing to attend or participate in games hosted by nations with a poor human rights record.

“We can’t continue with the Olympics in China. Speaker Pelosi told Congress’ Human Rights Commission and the Congressional-Executive Commission on China during a meeting about the Winter Olympics.

Nancy Pelosi suggests that athletes should be able to compete in the games but that world leaders and royalty should not come to attend them.

“Knowing that the genocide is still happening while you are in China, it really makes you wonder how much authority you have to talk about human rights when you were willing to pay respects to the Chinese government.

Nancy Pelosi has blasted corporate sponsors of the 2022 China Olympics, and specifically those who have lobbied to weaken a key section in bipartisan bill that targets the use of forced labor in Xinjiang.

The Chinese government denies the allegations that they violate the human rights of Muslims calling it “lies and disinformation”. 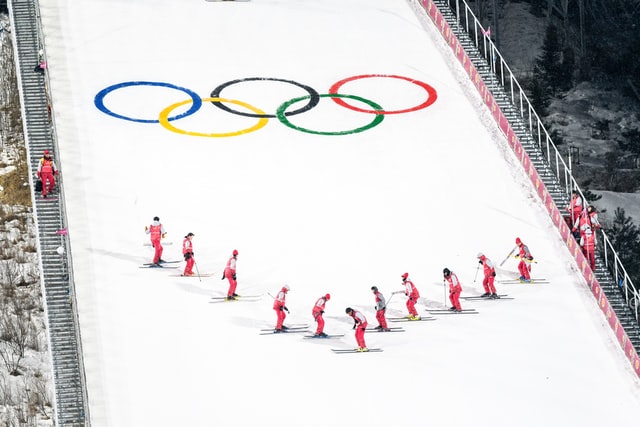 In 2018, an independent United Nations panel said it had received reports that at least one million Uyghurs and other Muslim people were being held in camps in China.

According to Beijing, these vocational training centres are helping people stamp out violence and extremism. They reject accusations of abuse or genocide.

But there has been a growing number of US politicians who are urging for a change of venue.

Pelosi doesn’t know if her plan will work. “I don’t know if it’s possible, because we have not succeeded in the past,” she said.

In 2008, Nancy Pelosi called on then-President George W. Bush to boycott the opening of the Summer Olympic Games in Beijing in protest against China’s human rights record at the time.

More than 80 other heads of state also attended the opening of the games. George Bush was one of them.

Activists and lawmakers on both the left and right are calling on President Joe Biden to boycott the 2022 Olympics in protest, citing reports of China’s treatment of Uyghur Muslims. They also cite Beijing’s response to protests in Hong Kong as reason for concern.

The U.S. Olympic Committee does not want boycotts of the Olympics because it is hard for the athletes who have spent years training to compete.

“While China has changed over 30 years in some ways, it is bad that its human rights have gotten worse,” Pelosi said today at the virtual hearing.

Pelosi said that she is a dedicated Olympics fan and views athletes’ performances in the games as a source of pride.

“Let’s support them at home,” Pelosi said. “Let’s not support the Chinese government by having heads of state attending.

“Silence on this issue is unacceptable,” Pelosi said. “It enables China’s abuses.”