South Africa is burning yet again

What started as an act to defend the integrity of former South African president Jacob Zuma has quickly turned into an internal clash and bloodbath between South Africans and the country’s militants. Initially, Zuma fans and supporters seemed like loyalists fighting for their iconic leader, who they deemed was abused and oppressed by the law after SA courts allowed the police force to arrest him. Tension was slowly building up among Zuma loyalists, especially when Zuma was given a limited period to hand himself to the police or be dragged to jail with an arrest warrant given out. Locking up an established political leader who is held in high regard in most parts of SA steered up anger from onlookers who clearly did not like how this issue was handled. 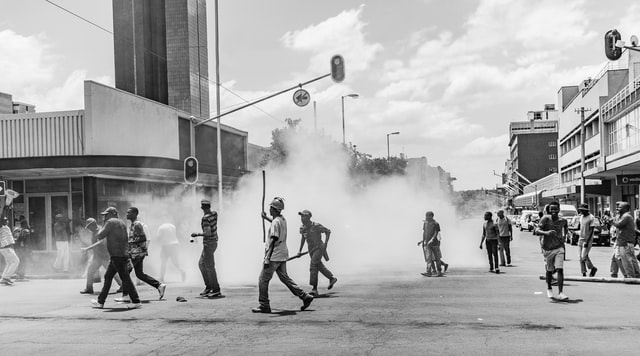 Given the horrific scenes in the country, it is clear that the protesters changed lanes and are now gunning for selfish gains rather than standing up for their incarcerated leader. Protesters emerged immediately after Zuma was handed a 15-month prison sentence for contempt of court last week on Thursday. The former president defied a court order to appear at the Zondo Commission, which was investigating corruption activities during Zuma’s reign. Witnesses on the Commission fingered Zuma’s involvement in some shady dealings, and the presiding Commissioner requested Zuma to attend the session so that he could clarify the allegations labeled against him. But the ANC politician was unwilling to do so, and Zondo sought court intervention, which then ordered Zuma to testify at the Commission, which was backed up by the state. He was a person of interest at the Zondo Commission as it was inquiring into allegations of corruption against when he was president from 2009 to 2018. Things were bad for him after he was linked to the Guptas’s corrupt dealings in SA.

SA courts then gave Zuma an ultimatum to hand himself over to the police, and he tried to appeal against the ruling meant to imprison him, but he failed. On the last day when the police were supposed to take him in, various supporters had gathered outside his homestead waiting to defend his honor, but eventually, he was taken to prison. This did not sit well with his sympathizers, who crowded the streets demanding president Cyril Ramaphosa to release their beloved leader. Nobody anticipated such a nationwide protest because these protests were centered on Kwazulu-Natal streets and people thought it would die due to the uncooperative nature of the government ignoring the protests’ ‘foolish’ demands of trying to override a court’s ruling [Source].

The riots became rampant last week throughout the weekend and have intensified in Kwazulu-Natal and Gauteng provinces. But things have now escalated to a ‘battle’ between citizens and the police forces, with Ramaphosa signing off on the deployment of military personnel to curb the wild protesters. A closer look at this brawl shows a shift from a political protest to more of a ‘looting strategy’ while acting like people fighting for Zuma’s freedom. Social media video footages show that the violence had spread to Durban as Lenmed Hospital was burning on Tuesday.

According to a statement by the police Major General Mathapelo Peters on Tuesday night, many deaths were recorded in Gauteng and Kwazulu-Natal after the rioters started looting food, clothes, technology gadgets, electrical appliances, liquor, and furniture. Unfortunately, some were killed during this havoc and stampedes as thousands of protesters were trying to enter different shops to loot. The Major General noted about 27 deaths in Kwazulu-Natal province and 45 in Gauteng province, which was being investigated. Some people died due to explosions from ATMs, fuel service stations, and other facilities because of the firepower used [Source].

In trying to avoid huge casualties, the police forces fired rubber bullets which only injured the protesters, but live rounds were shot from the crowds. Then-president Ramaphosa summoned the military personnel to deal with shooters among the marauding crowds, and about 2 500 soldiers were deployed to work side by side with the police officers. The presence of military personnel on the streets is a bad sign in the country, especially if they are clashing with their people. Business people with personal guns and armed security offices were firing at the crowd to chase away the looters. Various shop owners also launched a defense system to protect their businesses from looters. A lot of arrests were made, but this did not deter the rioters from running wildly in the streets [Source].

After the army was deployed, people expected the situation to be wrapped up in a few hours, but the crowds offered strong resistance with more vehicles and buildings set on fire while roads were barricaded with huge stones. The rioters were firing showers of stones at the police forces and breaking their cars. The looting continued, and business owners were forced to close down their operations. Johannesburg recorded looting incidents, and some of the perpetrators were arrested, specifically those who stole from shops inside the Mayfair Square mall. Government officials believe that criminals have hijacked this protest and turned it into a web of criminal activities for selfish gains. Hence the SA police and militants should treat them as ‘criminals in action’ [Source].

However, some analysts noted that the protests are being fuelled by poverty and hunger among the citizens. Youth who are actively participating are unemployed, so they have been gifted with a chance to feed themselves. Authorities reported that among those arrested are children, youths, young adults, and women. Thus the demography of looters points to an underlying problem of others who were motivated by hunger and poverty. The violence was mostly witnessed in ‘ghetto’ areas like Soweto, Kwazulu-Natal, and Gauteng provinces dominated by low-income earners. Others have cited the slow reaction by authorities who thought they were dealing with a normal protest but later saw the intensity. Pictures on social media show empty shelves and shops, which means the protesters had ample time to take goods home [Source]. A lawsuit is in the pipeline to sue Ramaphosa and his executive for their slow response against protesters. They are blamed for leaving the crowds gathered around Zuma’s residence, which was the root of the violent protests. In counter-argument to this, some analysts believe that it is hard for one to fight against his kith and kin, so Ramaphosa delayed launching an offensive strategy because a leader cannot wipe away his people.

President Ramaphosa addressed the nation this week trying to reason with his citizens, but he is seen as the ‘bad guy who was after Zuma’s head. Deploying the army is the last move, and this shows how the president had deemed it necessary to do so. About 72+ deaths have been recorded, and with a large number of injured people, the number of deaths might increase. Some have likened the current situation to events during the apartheid, and Ramaphosa is faced with a tough challenge to employ extra force against his own people or reason with them.

No matter the good intention of these so-called Zuma fans at first, the current situation in SA shows that these protesters have long lost their plot and objective; hence someone needs to put a cap on them before more damage is enacted.