Former US president Donald Trump is a controversial public figure who seems to be always having friction with government officials and the private sectors; his tentacles poke almost everywhere for trouble and attention. Trump’s recent clash is with the social media giants, which he is accusing of oppressing his rights to use the platforms. At a press conference, Trump announced that he would take legal action against Facebook, Twitter, and Google. The gist of his legal plan is centered on how these technology companies are censoring conservative voices on their platforms.

According to Trump’s address, Facebook, Twitter, and Google as tech companies are anti-conservatives and have been exerting a lot of effort in clamping down on voices of the other people who have different and unique views. Social media online platforms have grown to become a viable ground for marketing, campaigning, advertising, selling, trading, and networking. As a politician, Trump exploited the advantages of social media to campaign for his presidential candidature and hold online rallies while addressing his various supporters. He posted his visions and aspirations on his online social media accounts, which helped trigger the ‘Make America Great Again’ movement.

Trump’s problems with social media online platforms started when he was posting racists and inhumane posts about foreign nationals in America and his plans to end the floods of migrants who move to the US. He blames these people for being involved in a lot of criminal activities that happen in the US. His accounts were suspended for making such remarks about other races, and he was denied access to them. According to him, social media should be used, to tell the truth to people, and that is what he was doing when his accounts were suspended. Due to his large following, Trump’s tweets traveled across a huge horizon with numerous retweets and likes, so it was essential to ban any more racist comments from such an influential public figure. 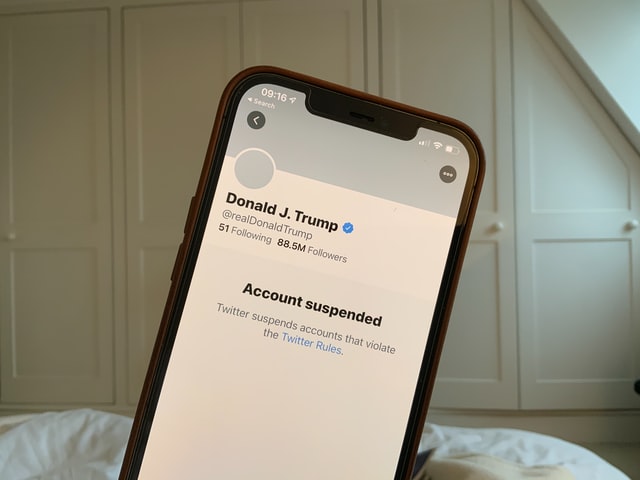 After losing the 2020 elections to Joe Biden, Trump went on a wild run, telling his loyal fans and voters that the election was stolen from him. His audience blindly believed these utterances without evidence or backing up facts then paraded the information all over the US. He used his social media accounts to propagate accusations against Biden and quickly start a chain of the allegations. This developed into an uncontrollable brawl of angry loyal supporters blaming the government, elections officials, and observers for cheating. During these developments, Trump kept utilizing social media platforms as his mouthpiece to deliver information to the people. Eventually, it sparked a rebellious spirit in his fans, who stormed the US street defending his honor. The rioters roamed the government facilities causing havoc while hunting for Congress members [Source].

Trump was blamed for inciting violence through social media, and the companies decided to ban him. He was banned from Twitter, and his Facebook account was suspended until 2023 due to the violence witnessed after his online rants. In his address, Trump blamed the tech companies for silencing individuals who wanted to fight for the freedom of Americans and were standing up for the truth. The former president argued that censorship is illegal and goes against the right to freedom of speech and expression [Source].

However, Section 230 is a US federal law that gives internet companies the power to control and manage their users. Under these laws, the companies’ officials can remove any obscene or violent posts and ban any user that goes against their set standards or rules. While in office, Trump signed an executive order to lift Section 230 legal demands, but President Biden revoked it after he took office in May. Trump seemed determined to take his case to court and vowed that a lot of other people whose rights have been oppressed by these companies would come forward to present their cases. He believes that this war is for everyone and will liberate them from the dictatorship rule of internet companies [Source].

Donald Trump is regarded as a politician who is always trying to find relevance since he is no longer the president. Some analysts noted that he is just barking, but he will not bite because he is announcing lawsuits and not following through. With this specific case, Trump seems like he is treading on thin ice as he has no comprehensive arguments for his cause. Unless he comes up with some innovative initiatives, this will likely be a ‘failed attention’ seeking his stance.