It was only a matter of time before Ford jumped on the electric vehicle bandwagon. Ford has been teasing the public for months with their plans to release an all-electric F-150 truck, and now they have finally delivered. The company revealed its new Electric Lightning pickup during Joe Biden’s visit to the Michigan plant this week. The company aims to make it the Model T of electric vehicles, which will be able to go from 0-60 in 4 seconds with a maximum range of 300 miles per charge.

Ford’s newest electric truck may be an excellent opportunity to take over Tesla and Rivian in the EV market, but it still represents a challenge. Ford has spent more than 100 years building their reputation with pickup buyers across America; if they cannot make their entry into this new market work, they could lose all that hard-built influence.

The explosion of electric trucks in the market makes for a dramatic time for the industry. Ford needs to stay two steps ahead of its competitors to protect its primary source of profitability.

Prices for the new Ford F-150 Lightning will start at just under $40,000; this is not including any federal and state tax incentives given to electric car buyers. A lavish model with more features such as leather seats and foldout desk prices can reach more than $90,000.

Ford previewed its electric F-150 Lightning pickup during a visit by President Joe Biden to the Michigan plant that will produce the vehicle.

President Biden addressed a crowd gathered at the factory before test driving an Electric F-150 Pickup.

After spending the beginning of his speech discussing the automotive industry and electric vehicles, Biden turned to American’s need for production to catch up to China to discuss new technologies, including batteries and semiconductors.

“The future of the auto industry is electric,” “There’s no turning back.”

Biden visited Ford’s facility to promote his plan for American-made electric vehicles and a $2 trillion infrastructure package that includes $174 billion to spur the development and adoption of electric vehicles.

Ford said it had already received 20,000 reservations for the new Lightning trucks. Ford will build it in a new factory on the same site as the automaker’s famous Rouge complex in Dearborn, Michigan. Reservations can be made with a deposit of $100 and are expected to be available in the spring of 2022.

Ford’s electric F-150 Lightning has some heavy competition. The GMC Hummer EV is coming soon, and the Rivian R1T is expected to arrive this summer. Don’t forget about Bollinger with its chunky B2 pickup or that hotly anticipated Tesla Cybertruck.

Ford plans to offer the F-150 Lightning with 775 pound-feet of torque, making it more powerful than the F-150 Raptor and Super Duty. For comparison, those engines produce 675 and 450 pound-feet, respectively. Ford’s new electric F-150 Lightning is expected to have a 0-to-60 time of around 4 seconds.

Tesla’s truck will pack three motors, and while Tesla has yet to confirm final power figures, it says its truck will sprint to 60 mph in 2.9 seconds. We don’t know for sure how much more powerful it is than the Model S. Still, Tesla believes that it’s enough of an improvement over diesel-powered trucks and respective electric vehicle competitors. 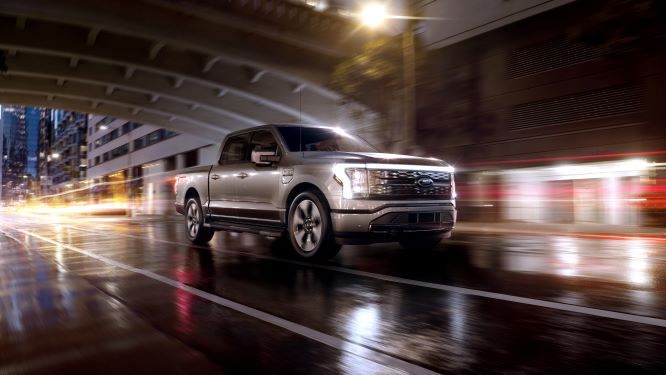 The F-150 Lightning will have a greater range option than any other EV. Options include an extended battery to last 300 miles on one charge or a standard battery to go 230 miles without recharging. The car comes with an 80-amp home charging system that plugs into any outlet and can add 30 miles of range in an hour and a full charge overnight.

However, the F-150 can’t compete with the Tesla Cybertruck’s, which claimed 500 miles of range on the top-tier Tri-Motor version. Of course, that’s just speculation for now. We’ll know more when deliveries start later this year in early 2022.

The 2020 Ford F-150 Lightning can tow 10,000 pounds on XLT and Lariat trims with the extended-range battery and Max Trailer Tow. To help tow, the Ford Electric F-150 Lightning pickup has a new Pro Trailer Hitch Assist system that handles steering, throttle, and brakes.

Tesla claims to be able to lug 14,000 pounds in Cybertruck’s Tri-Motor trim which handily outperforms F-150 Lightning, Rivian, and Bollinger.

Ford’s Electric F-150 Pickup Starting at $40,000; however, this does not include the destination charge, which is still unknown. The Lightning is less expensive than an equivalent gas-powered 2021 F-150 XL SuperCrew 4WD. The base MSRP before any tax incentives or country-specific taxes is interesting considering the federal tax credit of $7,500 for an EV purchase. A fully loaded model will likely start at around $90,000, which might be expensive, but the Lightning appears to have a reasonable value.

Tesla says that its new truck will start at $40,000. It’s a reasonable price. But we have heard that Tesla has promised this before. Remember the Model 3? It was supposed to cost $30,000, but then it was more expensive when it came out.

Pickups are viewed as an essential way to increase the number of people who buy electric vehicles. They’re the most popular type of car in this country, and they’re also significant for fleet and commercial customers. It’s essential to keep track of all the developments occurring in the electric vehicle industry before committing your hard-earned money. Factors such as price, range, payload, and speed are all measures to take into consideration. Let’s find out whether Ford and Tesla can deliver on their promises.

The Social Determinants of Health: Covering Financial and Non-Financial Factors

What is the Antitrust Law? The Underpinning Acts