Hate Crimes Against Asians Increased by 76% in 2020

Hate crimes against Asians increased by a whopping 76% last year, and this became an area of concern for various human rights activist groups and the FBI.

Since the coronavirus outbreak pandemic, Asians have been subjected to intense ridicule, discrimination and hate crimes. Various theories were propounded about the origins of this deadly virus, and one theory that took centre stage was related to how covid-19 is a biochemical weapon. It was stated that the virus was created to demolish China’s enemies, and other suggestions were linked to a conspiracy plan by the developed countries to murder people across the globe. 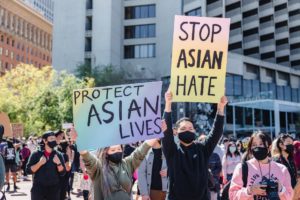 According to the FBI, Asians faced a lot of hate crimes and the number of such cases kept on rising, especially in 2020. The published data on Monday noted that hate crimes towards people of Asian descent rose by 76% in 2020. Around 279 crime incidents against persons of Asian descent were reported to authorities compared to 158 incidents recorded in 2019.

Of all incidents reported, the FBI revealed that more than 60% of hate crimes in the US happened due to one’s race, and this was used as a valid excuse to exercise this heinous act.

Jay Greenburg, deputy assistant director of the FBI’s criminal division, was interviewed by ABC News and commented on this issue by highlighting the dangers of hate crime to society. He said, “Every hate crime is an attack on the community” [Source]. Regina Thompson, the head of the FBI’s victim services division, spoke on the adverse effects of a hate crime and said it “really strikes at the fundamental core of who the person is, which makes it very different from some other violent crimes”. She further explained that “It is an attack on something that is within the person’s identity, something that’s very immutable about them and often something that they can’t ever change. So that has a profound psychological effect.”

According to Greenburg, “most hate crimes are directed at African Americans, but acknowledge there was an uptick in anti-Asian hate crimes due to COVID-19”. In May 2021, the House of Representatives was persuaded to push forward the COVID-19 Hate Crimes Act “in response to the rise in violence against Asian Americans during the coronavirus pandemic” [Source]. Republicans members voted against the act, and this did not come as a surprise since their leader Trump has unique views on the matter.

The former US president referred to covid as the “Chinese” virus and blamed the Asians for being negligent by allowing the virus to “escape” from a lab in Wuhan. Trump believed that the Chinese government deliberately released the virus vengefully against Americans and other Chinese enemies.

Hate crimes of this nature “coincided with the outbreak in the United States of the Covid-19 pandemic, which some racists have unjustly blamed on Asian Americans because of the coronavirus’ origin in China. Rhetoric attacking the Chinese government from former President Donald Trump and his allies contributed to the anti-Asian American sentiment” [Source]. 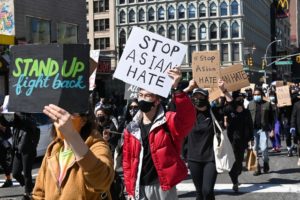 Several attacks were launched at Asians after the Chinese government refused a second probe into the origins of covid-19 by the World Health Organisation. In rejecting the second probe, Minister Zeng Yixin said, “We hope the WHO would seriously review the considerations and suggestions made by Chinese experts and truly treat the origin tracing of the Covid-19 as a scientific matter, and get rid of political interference” [Source].

Due to this, other parties argued how China was trying to hide a trail of misconduct linked to the leaking of covid. This fuelled a negative attitude towards Asians, and they faced a lot of discrimination across the globe.

Greenburg said, “Because a hate crime is defined as a violent or property crime with a bias motivation, that crime could be categorized several different ways”. He added that “We would like the public to reach out to us if they believe that they are a victim of a hate crime. It’s not for the public to make that determination; we will work with our state and local partners and help determine how best to investigate that.”

When it comes to helping victims of hate crimes, Thompson noted that “The FBI does have a victim services division that is focused on assisting and supporting the victims of federal victims and that when they are a victim of a federal crime, we are there to assist them and they can expect us to do that with understanding, dignity, fairness and respects”.

Stas presented by the FBI had a total of 8 052 single-bias incidents, and they involved 11 126 victims. About 20% of these crimes targeted a “person’s sexual orientation and 13% of the hate crimes that occurred in 2020 were due to religious bias”.

Hence, this calls for an immediate intervention by authorities to put a cap on the hate crimes against Asians before this grows to become a social enemy like racism or discrimination.

Is It Time to Legalize Marijuana?